The first MOCHA meeting was successfully held in London on 20th and 21st October, in the St Bride Foundation in the heart of London’s City.

The first day saw each Work package group meet to discuss the forthcoming work, and for many researchers to meet each other for the first time. Productive discussions were held and plans for the future were made. Everyone left the meeting looking forward to the next three years’ work.

On the 21st, the project was formally launched in the presence of all the delegates and the EC Project Officer. After an introduction from the Project Leader, Professor Mitch Blair from Imperial College, London, each Work Package Leader gave a short presentation about their tasks and outlined the first steps that they would take in their research. 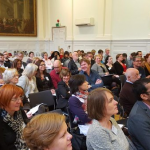 The Country Agent group met for the first time in the afternoon of the 21st so that they could discuss their expectations from the project, and discuss the work process for posing questions and collecting answers from each country.

The External Advisory Board also had an extremely productive meeting, Prof Richard Parish was elected to be the EAB chair, and terms of reference for the EAB were agreed by all present. What became immediately evident in the EAB meeting was the richness of resource that the EAB members can give the project, in terms of experience and knowledge, evidence such as important grey literature documents, and in contacts through their organisations. 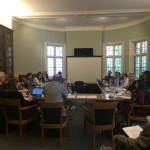 Newsletters are produced about our project every quarter.