MOCHA work package leaders and the External Advisory Board (EAB) held a 2-day meeting in Bratislava, Slovakia, on the 12th and 13th April 2016; to discuss progress in the first six months of the scientific work of the project.

We were hosted in this beautiful city by one of the MOCHA country agents, Prof Jozef Suvada from St Elizabeth University of Health and Social Work in Bratislava.  Prof Suvada gave us an introduction to the important and often harrowing work that St Elizabeth University does in Lebanon, South Sudan, Kenya and Kazakhstan among others in improving public health and providing basic health care to local populations; often in environments that experience conflict and extreme poverty. 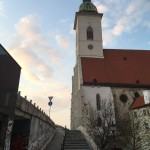 The first day’s meeting was chaired by Prof Mitch Blair, Principal investigator of the MOCHA project. In this meeting, the Work Package Leaders engaged in a project-wide discussion.

Each Work Package leader presented a summary of achievements that had been made since September 2015, and also what they expect to achieve in the next six months. This enabled any issues that have arisen to be addressed jointly.  There were several instances when work packages made plans to collaborate on certain forthcoming tasks to ensure that all angles of a particular research issue were addressed scientifically. This synergy of the work packages is all credit to the open nature of the project and the good working relationships that have developed since the project kick off meeting in October 2015.

The second day’s meeting was chaired by Professor Richard Parish, chair of the External Advisory Board.  In this meeting, the work package leaders were able to discuss their progress and intentions with representatives of the External Advisory Board, Aneela Ahmed, chair of the Youth Subgroup of the European Patients forum; Stefano del Torso from the European Academy of Paediatrics; and Ragnheiður Ósk Erlendsdóttir from the primary health care centre in Iceland. In this meeting, the work packages were able to ask the EAB for advice, feedback or potential contacts or literature sources; and the EAB were able to ask the Work package leaders for clarification on certain issues, or point out other avenues for discussion and evaluation in the project. A great deal of progress and collaboration was achieved, despite the fact only some of the EAB were able to attend due to other commitments and a strike by air traffic controllers at Brussels Airport! The notes of the EAB meeting and discussion are to be shared amongst the EAB so that further discussion can take place to feed back to the work packages. 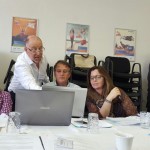 In short, both meetings were extremely rewarding. So far, the MOCHA project is running to budget and has no deviations from its original plan, which is an excellent start to such a large endeavour.  A key element in achieving this is the good communication between all members of the MOCHA project and the External Advisory Board. Our next meeting will take place as part of the MOCHA annual general meeting in the autumn of 2016.

Newsletters are produced about our project every quarter.